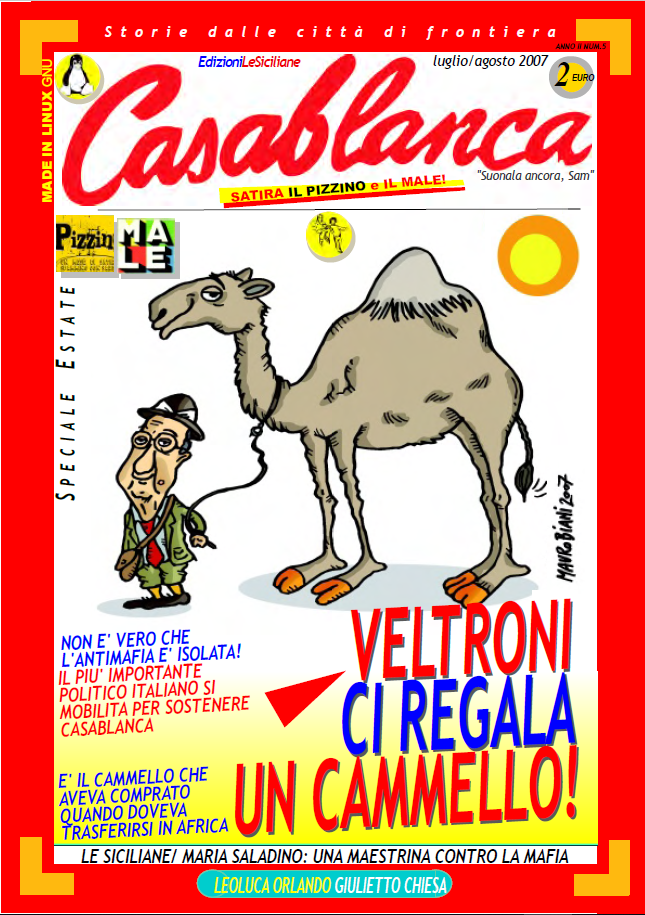 From Camporeale to San Diego, from San Francisco to New Orleans, on tour with Frank Laine raising money  to build a school in her town. She was the daughter of a local boss, and she spent her life looking after raped, sold, and starving children, giving them a choice. Sometimes she succeeded, sometimes she did not. Now she is 87 and she is angry, because she cannot drive to the social centres she founded. She writes books. "The old Mafia? It was different, always cruel, but different. After the Sacco, the Brusca families."

“I fooled them all, I wanted that soil to build there my first social centre, the bosses of that time were against it, but they did not think that a woman, a young woman, could face them, they were confused. I have never fought the local Mafia openly, but I did hinder them a bit”, she wittingly tells.

“The Mafia does not kill you because you are a woman – my mother used to say – and maybe she was right. That was the custom”, she adds.

Or maybe they did not kill her because she was the daughter of a former ‘man of honour’?

“Perhaps, but I am not sure, my father stepped out from the Mafia scene when he was young, and he never changed his mind again for my mother’s sake, before I was even born… I found out about this when I was 25… It has been terrible.”

“People tell me that I am 87, but my heart is 20”, she says, smiling and touching her heart. She repeats that two years ago she used to drive, but, after a serious accident, she now stays at home with Loredana, a young Romanian woman who is always amazed when a journalist comes visiting Maria and asks her about her life.

She was a teacher in Belice and she has always looked after needing, emarginated, raped children. To do so, she built dozens of social centres where different children could play together. When she did not have her own place, she used to bring the children to the Baglio, an open space under ‘Aunt Sofia’s house. She was a grumpy old lady who used to cut children’s balls with a knife, if they threw them at her window. Maria did not give up, she ran buying a new ball.” “Once I realised that I bought 50 balls in only one year.”

After 10 years of teaching in primary schools, from 1947 to 1958, she came up with the idea of a ‘children’s village’ with craft schools and an oratory. So, she started making plans and raising money. She was supported by a friend of hers, Pasquale Almerico, mayor of the town, manager of the school tuition, and leader of his Party.  “Pasquale Almerico was a close friend of mine. He was shot 105 times with a mitra. I heard the shots, I ran to save him, I took his hands in mine while they were putting him in a car.  I said, “Stay with me, don’t go, don’t leave me”… Vanni Sacco, his cousin, killed him because Pasquale refused to give him the membership of the Democratic Christian Party. He was a honest man…Vanni, on the other hand, was a member of the Mafia.” While she tells this, she is moved.

She is still emotionally involved in whatever she tells, so she cries and laughs depending on her story, which are countless. She quotes many writers.

In 1959 she started planning social centres, and so she started raising money to buy the land. “Without the land, we could not get the financing for the construction.”

At 7 AM I was there, I bought the wood, I started the work myself”. Money was never enough, and her salary was spent in a few hours, so she decided to go to America, looking for funds for schools and for children.

“My fellow countrymen wrote beautiful letters to their relatives, and I was welcomed like a queen. Some of them even asked me for an autograph.

As soon as I arrived, they made a huge party with Frank Laine, who proposed me to go with him on tour. In the end I went with him just for two shows, one of them was in San Francisco.”

“In America – she starts, amused – the Giordella family gave me a land to build an elementary school. When I went back to the town, however, I was surprised finding that the land was occupied by a farmer, who claimed it because of the adverse possession. When he saw that I was determined, he rapidly built a small house on it. What could I do? If he had succeeded in his intent, we would have waited for years, and we could not afford it.

Together with the children, every morning we went on the land while the farmer was working in a hurry, because the lawyer was working as well, we prayed “Lord, break his caterpillar, because the lawyer is coming…”, an endless, monotonous litany. Meanwhile, the old caterpillar went up and down, smoothing the land.  “Yes, Lord...”, repeated the children, while they were looking astonished at the annoyed driver. “Lord, break his caterpillar…” tru tru tru, and the caterpillar broke. “Hurray!”, the children shouted, and the school was built right there”. Maria is very amused and satisfied, while she tells this story.

The stunts that she did with her young and little scholars, or the brags that some of them did without her – the teacher – knowing.

Even though she did not agree, she has never judged. “I just wanted to give them a choice different ftom their fate. The Mafia was there, waiting for them to do little jobs.

I did not want to correct them, I just wanted to give them food, an education, an alternative….” She herself had troubles when studying, because “My father was a farmer and did not have the money to make me study outside our town. I studied through correspondence school, I sent my homework to Rome. When I graduated from high school, my final essay was about Don Bosco’s preventive method: every purse snatcher could become a great worker.  Why not using it here in Sicily, in Camporeale? It was a real Mafia centre, at that time”.

Her father had also been a Mafia member, referring to Nino Saladino, who was his relative. Uncle Nino shouted "GET DOWN, WE HAVE TO KILL YOUR FATHER.”

Between Camporeale e Castelvetrano, Maria Saladino, who was still a young teacher, found out about terrible, terrifying situations. “You have to take my three children" told me a poor woman, who had a terrible scar on her leg, between the knee and the thigh. "My husband had a big piece of bread under his pillow – she said – I stole it to give it to my children, who were starving, he realised and he threw a bottle at me, hurting my leg.  You have to take my children...”.

"Three children: two boys and a girl. All three raped by his father, probably the youngest, Maurizio, died because of this. Giovanni never fully recovered, he lives in a nursing home, he was really good at drawing. The girl was the strongest. Now she has a family, she lives far away".

"A mother had his daughter killed because she had an affair with her brother-in-law, her sister’s husband. She had a baby whose grandmother didn’t want to give me in order to make him study; when he grew up she made him sell drugs. He was an addict himself, I’ve lost sight of him, I think he is dead.".

She tells this as she cries. She tells about the children waiting for her at the bus stop. She went by bus to take them with her, in a place where they could study, but – most of all – eat and take a shower. Sleep on a bed. “Maria, Maria, Maria”, the children repeated. She went with the bus that the Banco di Sicilia gave to her and took them with her. Don Nicola Giordano interceded for her, and she got the bus.

“Together with my children, we have travelled across Italy. It was all free, we had the bus, in Umbria father Michele welcomed us, he transformed his aristocratic house into a social centre for children in need, in Lazio...”

“When they built the Sciacca-Palermo road, the Mafia was immediately interested in it, and threatened whoever thought could have worked without their permission. Ciro Sciortino was one of my children, a great worker. They approached him and told him not to take part in the tender. He did.

One day two men came and told the boy, Ciro Sciortino’s son, who was sitting on the truck next to his dad, get down, we have to kill your father. The boy got down and hid under the track. And they killed Ciro".